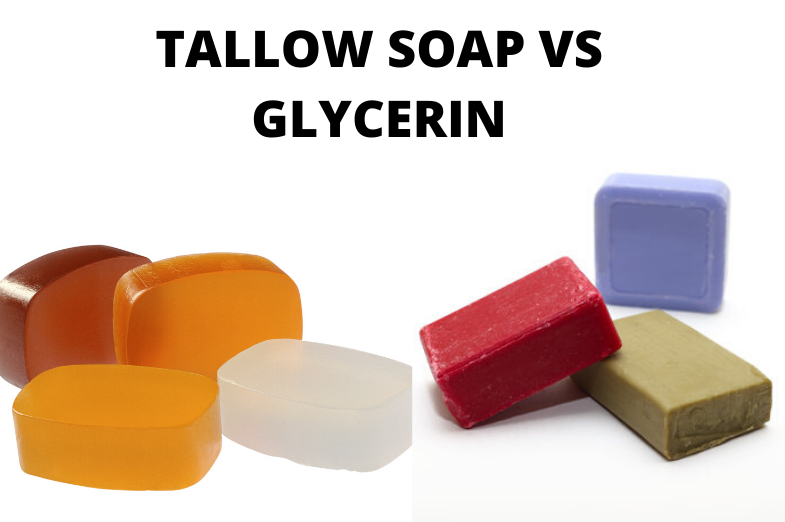 To form a soap, it needs to go through a different process called saponification. For this process, different ingredients need to be used – tallow is one of them.

Tallow is the traditional yet most widely used ingredient to make soap. It renders pure fatty acids when saponified and is inexpensive. You can check the best tallow soap here

Meanwhile, glycerine is a byproduct of soap. However, soap manufacturers remove this glycerine to make other different products like moisturizing lotion.

I found that while people are saying glycerine soap – it means they are referring to gel-like transparent soap. It is formed by heating the normal soap with sugar, alcohol, and extra glycerine.

It is heated until a gel-like transparent shape is formed. Alcohol prevents it from being crystalized, and glycerine balances the drying nature of the soap. Check the best glycerine soap here!

We know how they are formed, let’s check the pros and cons of tallow soap vs. glycerine soap.

You can easily render tallow from beef. If beef isn’t available, you can also use pork fat or lamb fat, which are called lard. It is cheap and accessible. Isn’t it?

Tallow soap doesn’t smell if you strain it properly. But if you think it smells – you can add a few essential oils to it. It provides a good fragrance.

Even if you buy beef, you will waste fat. Isn’t it? Rather than throwing it out, you can make tallow, which is a great alternative.

You don’t need to go through an advanced process to make tallow. A simple pot or cooker is enough to make great tallow.

It is not necessary that tallow is always being produced from beef. But sometimes also from sheep fat. Unfortunately, using sheep fat, it contains lanolin, which is a yellowish substance secreted from sebaceous gland from the wool of sheep. These chemicals affect your skin, causing allergies and dermatitis.

As glycerine has a lower pH value than most soap, it will retain moisturizer in your face easily. So, If you have dry or sensitive skin, glycerine soap works effectively into it.

Comparing glycerine soap to tallow in terms of saponification, it needs to go through different stages. Different chemicals are added while forming it. Thus, it is always expensive than other soap.

Different fragrances are added to glycerine soap. Due to these fragrances, people with sensitive skin might feel irritation and itchiness.

Sometimes alcohol is also mixed into glycerine soap to prevent crystallization. These alcohols might affect your skin. Thus, you need to get rid of glycerine soap that contains alcohol.

To make a tallow soap, you will need 3 to 5 pounds of fat, a large pot, water, salt, and colander

To make a glycerin soap, you will need, microwave, glycerine, milk,  and petroleum jelly

Tallow doesn’t clog up the pores. So, it is beneficial for your skin. I would suggest not to use products that contain comedogenic ingredients because it clogs up the pores.

Shaving Soap Tallow Vs. Glycerine – both have their advantages and disadvantages. You can prefer any soap depending upon your skin. If you want an affordable and cheap soap, you can go with tallow soap. Meanwhile, if you have dry skin and need to moisturize it often, then you can try glycerine soap.